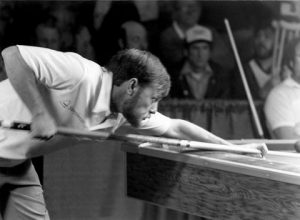 Truman Hogue grew up in the heart of Bank Pool country, in Louisville, Kentucky. Born January 11, 1946, Truman grew up in Danville, Kentucky, about 30 miles outside of Lexington. He got his start playing pool at about eleven years old when his mom used to work at a restaurant that had pool tables in the back; he got to use the tables every morning before school.

As a young man, time spent around players like Clyde Childress, One Eyed Tony and Donny Anderson helped elevate his Bank Pool skills. Before he settled down, Truman spent 8-10 years on the road, including extended stops in hot spots of action like Johnston City and Chicago. 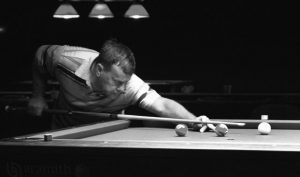 For the last 30 years Truman has been working construction, making him “one of the best pool players ever to hold down a fulltime job,” according to Grady Mathews. Although he reportedly doesn’t go into the poolroom much during construction season, the seasonal nature of the work does free him for about two months of serious pool a year – just in time for Derby City. Even at sixty he is still among the favorites to win any Bank event he enters, and with his good nature and fun-loving personality he is always a popular crowd favorite.