Players that knew ‘Fats’, especially those that knew him during his prime years before he took on the Minnesota Fats moniker, generally describe Fats as a very good player, but still a ball or two below the best. This is the way Eddie Taylor described it in an interview with OnePocket.org in 2005, “Fats had a very good game of One Pocket, but he wasn’t really considered tops. I was with Hubert Cokes one day in Johnston City, and he said ‘Why don’t you play Fats some?’ I had money in my pocket, but I said, ‘Fats wants 9 to 7; I can’t give him that.’  But Cokes wanted to stake me to play him $200 a game. I said, ‘I’ve got a pocketful, but I don’t want to play for yours if I wouldn’t play for my own, and I don’t like the game.’  But he just kept on, so I said okay, and we played. So the first game he banked something, and he ran seven and out. The next game I ran nine and out. The next game he ran seven and out again. So I quit and said, ‘You’ve got 10 to 8 if you want it, Fats.’  But he didn’t want it.”  Taylor at that time was considered the very best, so playing that close to Taylor was a very strong player. 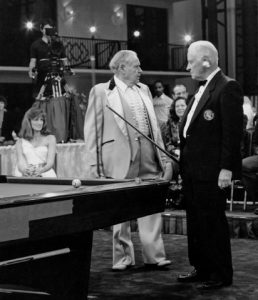 Fats & Mosconi at one of their TV matches — Willie has wadded up a napkin to block his ears so he doesn’t have to listen to Fats!
Photo courtesy of Conrad Burman

Of course many of us only knew Fats from his TV appearances, especially his made for TV rivalry with Willie Mosconi, when both Fats and Willie were a bit past their pool-shooting prime. And we have Fats to thank for insisting that One Pocket be included in those challenges, not just the 14.1 and 9-ball that Mosconi favored.  Apparently the first time they played, Mosconi insisted that the One Pocket be played last in the hopes that by the time the two out of three format got to the One Pocket, those results would not matter, Willie was still concerned enough that he sought out fellow Philadelphian Jimmy Fusco for some One Pocket lessons, just in case.

The rule and instructional book he helped Rozel Industries come out with features One Pocket both on the front and back covers and talks about “HIS GAME” – in capital letters. It was two years ahead of the first One Pocket rules in the BCA rule book.

“I have included MY GAME in this book. Nowhere else that I know of are the rules for “One-pocket Billiards” or sometimes called “Pocket Apiece Billiards” written and explained. In my opinion and in the opinion of all the top money players, it is the best, most interesting and toughest game of all on a pocket table – every billiard game should be mastered before this game can be played successfully. I enjoy playing it and am sure you’ll enjoy it too.”

— From The Minnesota Fats Book of Billiards, published by Rozel Industries in 1965

Front & back covers of the 1st rule book ever published that includes the rules for One Pocket.