OnePocket.org note: Grady Mathews has created a slide show of old photos of pool players as part of the exhibition show he puts on, which I recently had the pleasure of attending. As you can imagine, he has a great selection of old photos, as well as some original tournament and exhibition posters, plus he has the stories to go along with them! It was very entertaining to hear Grady tell many first-hand stories along with those old photos, really making those great old players come to life.

His collection is a pretty complete who’s who of One Pocket from the 50’s on out – including youthful shots of players like Hall, Varner, Sigel, Ronnie Allen, Danny D, Eddie Taylor and on and on – plus old-timers like Titanic Thompson, Fats, Cannonball Chapman and more! He has graciously lent a sampling of those photos to OnePocket.org, along with his 1991 History of One Pocket article for On The Snap magazine.

History of One Pocket 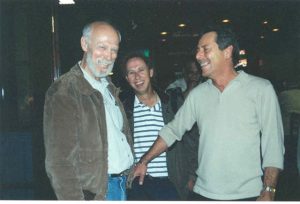 Grady and Nick Varner enjoy a laugh with the late Larry Lisciotti. Larry was not only a champion, he was one of the most entertaining players to ever pick up a cue stick.
Photo courtesy of Grady Mathews

Womack was said “to have kicked like a mule,” while Eddie Taylor rarely missed a bank and was, in fact, the undisputed bank pool champion of the world for many years. “Irish” was probably the best pool player that ever lived. He made a habit of beating very good players using a cue with no tip on it. I don’t think anyone ever beat Lingo playing even at One Pocket.

Then came the Ronnie Allen era, beginning around 1961. In 1962 Ronnie won the One Pocket Championship as Cochran’s in San Francisco, defeating Eddie Taylor in the finals. The tournament, incidentally, was played on five by ten tables with clay balls. Clem and Jersey Red were the only players at that time, in my opinion, in Ronnie’s class. Ronnie Allen brought “power One Pocket” into existence. Jersey Red was and still is one of the most innovative players to ever perform at One Pocket. Matches between Ronnie and Red were among the finest pool games I and many others ever witnessed.

“Bugs” Rucker, Chicago, became the best bank pool player after Eddie Taylor retired and he learned one Pocket along the way. An interesting man, he would often go without playing for a year, and then go down to the pool room and defeat some great champion. He usually arrived with an entourage. Bugs, without a doubt, was and is one of the most colorful and exciting players in the world.

Pool hustlers preferred One Pocket because the element of luck is much less than at 9-ball. The best player generally wins. It is also worth mentioning that One Pocket players traditionally have played for more money by the game than 9-ball players have by the session. In Detroit, during that city’s infamous gambling heyday, it wasn’t at all unusual to see One Pocket games in the five figures, by the game.

Article originally published in On The Snap magazine, January/February 1991

Reprinted here with the permission of Grady Mathews