The Lifetime Pool in Action honor this year goes to action legend, Jimmy ‘Flyboy’ Spears. Over his long career as player, Flyboy has been known as a determined competitor with a reputation for skills, extraordinary stamina and an eagerness to gamble, making him one of the best high stakes players of his era. And while many top players like to be staked by a backer, Flyboy has always preferred to bet his own. 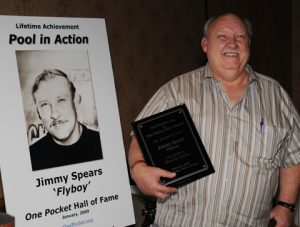 Flyboy at the 2009 One Pocket HOF banquet

Flyboy got his nickname from one of the first players who introduced him to One Pocket back when he really was in the Air Force. After he initially lost his bankroll his first time playing the game in a local poolroom, Jimmy returned to the base to practice his One Pocket break for a solid week. When he returned to the poolroom on his next off day, sure enough he ran into the same player, now well-dressed in a new outfit financed by their last encounter, and clearly ready to have another shot at some more Flyboy cash. Only this time the young airman was better prepared, and he turned the tables on the local player, and never looked back.

Like many players from his era (born in 1943), Flyboy got his start playing pool at the YMCA. When he was a kid, his family moved to Fostoria, Ohio, which just happened to be the home of another top player, Ted Elias. For years, Elias had a single table poolroom (converted from a garage) in which he hosted quite a few high stakes challenge matches, some of which naturally featured Flyboy.

After he left Ohio, Flyboy lived for years in Houston, Texas, where he got a chance to benefit from the knowledge of legendary players Jack Breit and Danny Jones. Beginning  the late 80’s Flyboy had a stake in a couple of Louisiana poolrooms that were synonymous with top players and serious pool action, one being the Sports Palace, formerly owned by Earl Heisler, and later on, Bayou Billiards in Baton Rouge. Eventually he came to own one of Jersey Red’s last Houston hangouts, the Cue and Cushion as well.