It was another full house for the 2008 One Pocket Hall of Fame dinner held Tuesday night during the middle of the action at the Derby City Classic in Louisville, Kentucky. With special guests with names like Reyes, Varner, Bustamante and Corr, and veterans of the road like Di Liberto, LeBron and Rood, the room was chock full of veteran players and fans of pool action. This was truly an occasion of great players being honored by their peers. Like One Pocket inductee Billy Incardona said, “To be honored among all these great champions is really something special.”

Co-Master of Ceremonies Grady Mathews and Freddy ‘The Beard’ Bentivegna led numerous other guest speakers in honoring each inductee in turn. Of course there were old road stories galore, and plenty of good-natured ribbing, but there were a few surprisingly touching stories as well. As much as these players have butted heads over the years, it is something special to see the genuine respect these guys have for each other when it comes time for Hall of Fame honors. 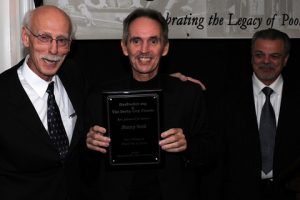 First up was this year’s Lifetime Pool in Action award that went to Jimmy Reid, the champion player who has been fighting a tough personal battle against esophageal cancer. Jimmy not only came to Louisville to receive his award, he valiantly entered all three divisions of the tournament, which is tough enough for those in good health to handle. When the banquet crowd was asked to “raise your hand if you’ve got Jimmy Reid stuck,” not a single hand went up in a room loaded with great players, past and present. The man is a definite fighter, with a very strong will to survive, and we all wish him the very best.

Turning our attention to the One Pocket inductees, Philadelphia’s Jimmy Fusco was honored, and good-naturedly harangued, as his cousin Pete Fusco and others described Jimmy’s unrestrained desire to tangle with the best, even if it meant going broke. Their entertaining narratives illustrated that to become the best, you have to compete against the best. Jimmy was clearly humbled to be considered one of the best, and in Freddy Bentivegna’s words, “One of the very select few that truly understand the right way to play the game.” 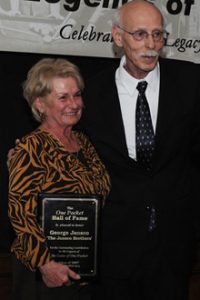 JoAnn (Jansco) McNeal graciously accepted induction for her father and uncle, the brothers George and Paulie Jansco, for their contribution to the legacy of the game as promoters. Between the Johnston City and Stardust tournaments, these two dressed up both the game and the players, got pool on TV, and into the history books for all time. Danny Di Liberto shared a few of his personal Johnston City stories, as he likened his own experience there to going to pool college – especially a college for pool gambling. In his rookie year at Johnston City, the veteran hustler Earl Schriver advised the young and admittedly square Di Liberto, “Kid, keep your mouth shut and your ears open and you’ll learn a lot.” It is hard to overestimate the significance of Johnston City to the legacy of ‘Pool in Action’, and the induction of George & Paulie Jansco is long overdue…

Freddie ‘The Beard’ introduced a dapper and dignified Billy Incardona, who clearly had a great time, equally ribbing his peers and basking in the recognition for an exemplary career as a great player, a savvy gambler, a wise and entertaining commentator, and a human being with a big heart. Player after player paid respects to Billy’s forty years of winning pool, and he’s not done yet, having been spotted several times in the action room at the Derby this year, with cue in hand and cash on the line. Pat Fleming spoke about the important role Billy played in turning Accustats from a statistical reporting concept for pool into the industry leader in pool videos. 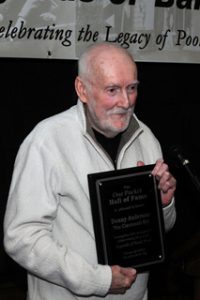 Last, but not least, was the induction of banking legend Donny Anderson in the Legends of Bank Pool category. His long-time rival and fellow Hall of Fame member, Truman Hogue, joined ‘The Beard’ in introducing ‘The Cincinnati Kid’. For years and years Donny was a banking terror in a town that had some terrors. Truman acknowledged that he never could beat Donny, and hated competing against him all those years, until finally he became a fan himself, admitting, “I guess he beat me so much I began to like him.” Despite his physical frailty, Donny was determined to stand out of his wheel chair and be helped up to the podium, where he brought the evening to a rousing conclusion with a surprisingly strong voice.

Meanwhile, Ed Kelly, who has been unable to attend the annual HOF dinner since his 2005 election into the One Pocket Hall of Fame, was able to slip over to Louisville on the Sunday after the Derby City Classic ended to receive his belated induction. In a small private gathering of legends of pool action assembled by photographer Diana Hoppe, Grady Mathews surprised Kelly with his HOF plaque.

View all photos from the event