The usual crowd was there, which lent a sense of familiarity, but the surroundings certainly had a fresh new look, as the 11th Annual Derby City Classic found a new home after a run of ten years at the Executive West Hotel in Louisville. Not that the Horseshoe Casino was really so far away — only about a half-hour drive from the old location — just across the Ohio River from Louisville in Elizabeth, Indiana. But it sure had a different feel from the cozy , but run-down familiarity of the Executive West.

One key feeling that was different was how much “safer” the Horseshoe felt, after a couple of troubling incidents at the old location, the sense of casino security was a very welcome relief. The consensus opinion was also that the food was much better, and the rooms were nicer, but it sure was a long walk from the hotel to the tournament area. Well, haven’t we always claimed that pool was good exercise? 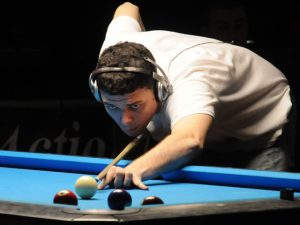 Despite a terrible ice storm, the downturn in the economy, and persistent rumors that the DCC “wouldn’t be the same”, the turnout was actually pretty darn good for this first year in a new location. And there was plenty of action, too, including a $25,000 10-Ball challenge match between Efren and Van Boening. Yet the Louie Roberts Action/Entertainment award went to a relative youngster, ‘Scooter’ Goodman. Scooter was the most notable of a whole crew of up-and-coming young guns that seem to have adopted the Derby City action room as their own.

Although the Horseshoe did not have enough room to accommodate any carom tables this year, there was still a variety of mini (and major) other pocket tournaments squeezed into odd hours and small rooms during the Derby. Bob Jewett held his Straight Pool event again this year, putting up $10,000 of his own money to insure he attracted a share of the world class players in attendance. Fans of that game were rewarded with two runs over a hundred fifty — John Schmidt with the high of 154, and Corey Deuel right behind him with a 153. Yet it was Danny Harriman that came out on top in the final play off.

Another guy that chipped in a chunk of change out of his own pocket was Eric ‘Fatboy’ Peterson, who ponied up $4,000 added for his own Fatboy 10-Ball challenge, featuring a select field of 32 of the top guns from all over the planet. Lee Van Cortezza took the top prize in that special late night event. 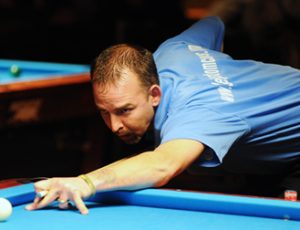 3 years in a row in the Banks Ring Game!

How does he do it in that kind of pressure cooker format, especially against top notch Banks competition, seemingly every year? This year was no exception, as Brian Gregg topped Shannon Daulton, Glenn ‘Piggy Banks’ Rogers and others to take home top honors in the Banks Ring Game. Shannon Daulton was the final victim of Gregg’s run.

Not only did veteran banker John Brumback win his first Derby City Banks crown, but he proved his all-around prowess as well, as he followed up his Banks win with top ten finishes in both One Pocket and 9-Ball to claim this year’s Master of the Table bonus. In prior years, two times Brumback had fallen in the Banks finals, but this time he was not to be denied, as he beat runner-up Rudolfo Luat twice in the finals.

We have a new Derby City One Pocket champion this year as John Schmidt maneuvered his way through the field of about 350 players, until he eventually took advantage of several eight and out’s to defeat Scott Frost in the finals. In a statement that may reflect a changing of the guard in One Pocket, the mighty Efren Reyes fell to a 30th place finish this year.