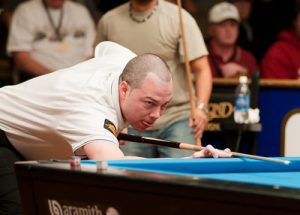 Scott Frost prevailed over from Texas, Sylver Ochoa.With Reyes falling in the earlier money rounds, and Bustamante in the semifinals, it felt a little like a new generation of players in the finals. Frost was heavily favored by the standing room only crowd (including the balconies!), someone forgot to tell Ochoa as he battled Frost ball for ball and game for game to push the match to hill-hill. After the breaking player had lost the first four games of the finals, Ochoa recovered from nearly scratching on the final break as he went on to build a four to minus one lead on Frost, and got the balls all pushed up table. However, Scott found a loose ball to bank and he managed to sneak back in to the game, eventually taking a 7-4 lead.

It’s Back to Back Banks Titles for John Brumback 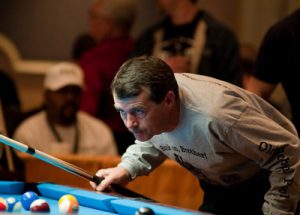 It seems that once John Brumback found the winning groove for his first Banks title at Derby City, he has become unstoppable, as he cruised through a field of 353 Banks aficionados to claim the 2010 title undefeated. Like last year, he had to beat one of the Filipino players in the finals, but this time it was Reyes that fell to the steady play of the reigning Kentuckian Banks champion.

View all Banks and One Pocket tournament photos from the event 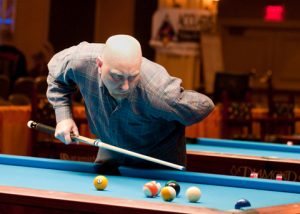 One-handed One Pocket made its return to the Derby City Classic after an absence of several years, and Jose Parica was on hand to defend his title against a field of 27 players. However, when the sun rose the next morning, it was Dave Krenzel that prevailed against Mr. Parica, as the final match wrapped up around 8 AM — just in time for the table cleaning crew. There was $1500 added to this extra challenging discipline, $1000 by Greg Sullivan (who also played in the event) and $500 by OnePocket.org.

View all “One-Handed” One Pocket tournament photos from the event
This site will grow to the extent that One Pocket fans like you sign up and start participating and contributing!
All you need to register is a valid email address, and an appreciation for the game of One Pocket.
OnePocket.org is solely supported by owner Steve Booth and any donations or revenue earned through the website. There are a number of ways you can help.