Tom Wirth grew up in Silver Spring, Maryland, just outside of Washington, DC. As a teenager, his next door neighbor introduced him to pool. His neighbor was a pretty good player and he helped Tom with the basics of stance and how to aim. When he was 15 or 16, back in the mid sixties, Tom started going to the local poolroom, Roman Billiards as often as he could.

As Tom recalls, Roman Billiards was a very good poolroom ; one of several good rooms in the area. After Roman Billiards closed, most of the players went to Randolph Hills, and that is where Tom really developed as a player. One Pocket was a very popular game at that time in the Washington, DC area, so from the very beginning, it was the main game Tom learned and played. There was one particularly good local player in Randolph Hills by the name of Walker Roach, who worked for a living, but as Tom recalls, “played tough as nails.” Roach never traveled, but he was great competition and Tom credits Roach for developing both his competitive instincts and his One Pocket winning ways. 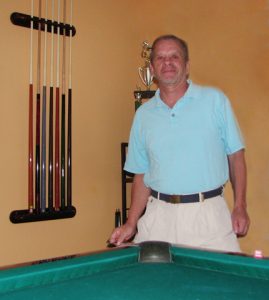 There were quite a number of high quality players in the DC area, so Tom did not have to travel far to find new and challenging competition. On the other side of DC there was Weenie Beenie’s room, Jack & Jill’s, and many other rooms in and around Washington. In those days poolrooms did not have the little local tournaments that are so commonplace now, so it was mainly action that honed Tom’s skills.

In his first foray into professional tournament competition, Tom won Strawberry’s 1993 major One Pocket tournament featuring many of the greatest players of the day. The format was race to five, single elimination, and along his route to the title Tom defeated Grady Mathews and Cliff Joyner, among others, before defeating Jose Parica in the finals.

Emboldened by that victory Tom played in several of the early Derby City Classics and a few of Grady’s Legends tournaments and did pretty well, but not finishing quite high enough to make the money worthwhile. He moved to Florida permanently after his mother died. Tom has an older Gold Crown at home suitable for occasional practice, but without much action lately, it doesn’t get the use it should. “I always tried to treat pool like a profession; I could never play fun pool – even with my wife.” He is also the house pro at the local Wynmoor Pool & Billiard Club.

OnePocket.org would like to wish Tom the best of luck in the tournament. If you would like to support our sponsorship of Tom in this prestigious event, visit the OnePocket.org Player Sponsorship page for more information. Anyone who donates will be entered in a drawing for some great memorabilia and instructional materials.

OnePocket.org would like to thank Mark Griffin and CSI for continuing the tradition of this prestigious event and for making this entry spot available. For further information about the US Open One Pocket, visit playcsipool.com.

Learn how you can help support this program
This site will grow to the extent that One Pocket fans like you sign up and start participating and contributing!
All you need to register is a valid email address, and an appreciation for the game of One Pocket.
OnePocket.org is solely supported by owner Steve Booth and any donations or revenue earned through the website. There are a number of ways you can help.