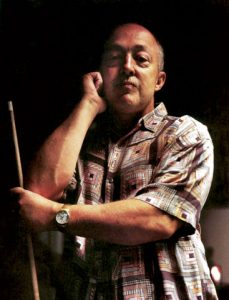 Gary Spaeth grew up in Cincinnati, Ohio and was introduced to pool at a very early age by his father, Joey ‘Cincinnati Kid’ Spaeth, who just happened to be a Johnston City and Stardust regular. Joey Spaeth was one of the top after-hours players of the mid-west and he introduced Gary not only to the finer arts of pool, but also to its subculture, including many of the great players of the day. All of this combined to give the young Gary a top-notch education in high caliber pool action.
Gary won several major Bank Pool tournament titles, including: 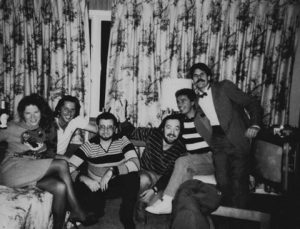 Hanging with friends at a tournament…
photo courtesy Sherm Adamson

A few words from Sherm Adamson about Gary…

Here’s a story you may be able to use. I took Gary to Chicago for the “Chicago Bumps” tournament in November of 1986. It was an eventful trip! Gary had won the last 2 major Bank Pool tournaments and I really thought he was the best Bank Pool player on earth at that time! The tourney was Saturday and Sunday, we drove up to Chicago Friday early looking for some action. We quite frankly were on “short money” leaving home with a little over a grand. One thing about Gary, he played much better on my money than his own! We had an arrangement. When we left town on a road trip, I gave Gary my bank roll to count. When we got back home, we counted it again and split whatever we were ahead. We seldom came up dry and were never busted! The closest we came was the second part of this story, but let me start at the beginning! 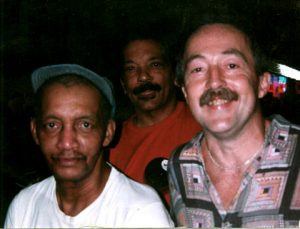 We spent most of Friday evening trying to shake loose some action at Chris’s and then back at the Chicago Billiard Cafe, where the tourney was being held. Gary was too well known to get any easy action, but finally he made a game with Glen “Piggy Banks” Rogers giving him 8-7 banks. As you’re probably aware, bank pool is about the hardest game to spot some one at. 8-7 in banks is a much bigger spot than 8-7 in one pocket! I know it doesn’t sound logical but bank pool players will agree with this! It’s because in one pocket you may bank a ball and start a run but you’ll shoot most of the balls straight in. Anyway Piggy had a good stake-horse and we were in action for $100 a game. 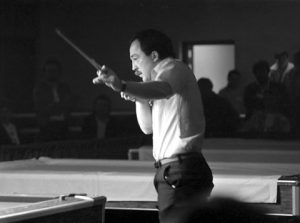 Gary was in dead punch! Maybe as good as he ever played! He beat piggy 9 games in a row for $100. Honestly, 8-7 with Piggy was a tough game and I didn’t expect it to be so easy. Piggy’s stake-horse pulled up at 9 games and Piggy pleaded with him. He said, “Man, I’m telling you I can win at this game! He cannot give me 8-7! He’s just SPELL BANKING!” Piggy’s stake horse said “You know I actually believe you! I agree, he can’t give you 8-7 and beat you like this! He must be SPELL BANKING! Problem is, we just don’t know how long this SPELL is going to last!” The only saving grace is that the stake-horse could tell that there was no “business” involved, Gary just played beyond comprehension! 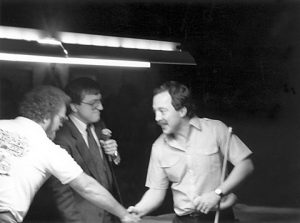 Gary is congratulated by runner-up Wade Crane on his victory in the Banks division of the 1986 Clyde Childress Memorial torunament. That is Pat Fleming at the mic.
photo courtesy Bill Porter

The next two days Gary went through the tournament like “shit through a goose”! He played Freddy in the finals and Freddy slowed him down enough to make it a little closer than any of the other races to 23. The tournament format was using a 14.1 continuous full rack format, race to 23 balls. Freddy was the consummate shark and used any thing he could to win. He’s unabashed about this! Ha-ha.

Just as the tournament was ending, Bugs showed up! There was a buzz in the room as soon as he walked in! There was bound to be a showdown between Gary and Bugs! Gary wanted to play, but he didn’t want to risk his tournament winnings. Like I said he had a lot more confidence and played better on MY money than when he risked his own! I didn’t mind because he really needed the money more than I. Well after we chopped our winnings and took out expenses I had a little over $1500 to gamble with. Not really enough to tackle Bugs when he had his suitcase stake-horse. 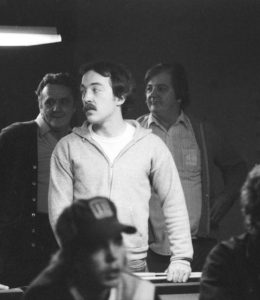 Gary at a 1982 Dayton Ohio tournament.
Standing behind him, with his hand on his hip, is his father Joey Spaeth.
photo courtesy Bill Porter

Greg Sullivan, who’d been a friend of Gary’s and mine for quite a while, asked if he could get a piece of the action. He had a grand to bet. We let Greg in and the race was on! They played a race to 4 for $1000 the first set! Bugs played pretty good, but Gary was fresh off a tournament win and was still in dead stroke. He beat Bugs 4-1 the first set! Bugs’ stake-horse came over with his suitcase (looked like one of those old doctors bags) full of money! He paid off and told Bugs not to worry. Even if we could out play him, we could not out bet him! That kind of pumped Bugs up a little! He wanted to double the bet!

I said no! Greg said wait! Sure! We had a powwow and I explained that we should not raise the bet yet! We now had 3 barrels at $1000 a game. If we lost the next set we were still in action! If we raised the bet, then, to $2000, and lost we’d have to quit, because you can’t lower the bet once you’ve raised it! Just don’t work that way! Greg argued that we had an opportunity to make a BIG score and had to take the shot! I still felt it was poor money management and we should play one more set at $1000 first! Well Greg had already shown his willingness and a bunch of the people were woofing! I finally gave in and let them play for $2000. 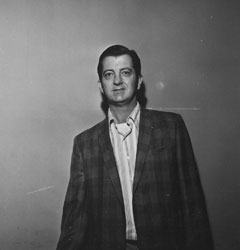 The second set came to hill-hill and to the very last ball. Safety’s were played back and forth ‘til Bugs decided to take a flyer! Gary had him froze, cue ball on one end rail and object ball on the opposite end rail. Bugs made one of the best “straight back” banks I’ve ever seen for the cheese! And as I feared, we were out of barrels! Over the 2 sets, Gary was way ahead in games and balls banked, but we were stuck $1000! This was a good lesson in money management though! I never made that mistake again!

I’m really looking forward to the Derby and especially the banquet! This has given me reason to think a lot about my old buddy lately! I really miss him! We spent a good part of 25 years either on the road or planning another trip! He was my closest friend and I’m so glad he’s getting the recognition he deserves! Unfortunately as we used to joke, “It’s a bitch to be the best in the world at something and can’t earn a living.” There was less money in bank pool than any other game, especially after you’ve won every major bank tournament in about 5 or 6 years.