Why take up One Pocket?

Many pool players find One Pocket to be the most rewarding pocket billiards game of all. It is often likened to chess on a pool table, although the strategy isn’t truly as deep as chess. Yet in One Pocket, beyond the tactical thinking, players still need to step up to the table and execute their shots.

It is a game that players often graduate to after building a foundation of pool skills at 8-Ball, 9-Ball or Straight Pool — and sometimes even 3 Cushion Billiards. It has a more daunting learning curve than other pool games, which makes it not so well suited for beginning players.

It has less ball running, yet much more head-to-head maneuvering than other pool games. It is guaranteed to tax your thinking, expand your shot horizons and stimulate your pool creativity. It is these qualities that make One Pocket so seductive once you begin to learn the game. Of course if you don’t understand the game, it can look pretty boring – not so once you begin to understand, though!

There’s a lot of action in One Pocket – maybe partly because players have more confidence that their skill will prevail in One Pocket. One Pocket is also very easy to handicap so players of different skill levels can compete together. This is a good thing, because the range between player’s skill levels is perhaps wider in One Pocket than it is in other pool games!

One Pocket often becomes the game of choice for maturing pool players who may have lost a little of their sharp eyes, but still have all the other tricks of the game in good working order. So if you are starting to have trouble keeping up with those 9-ball players with their young eyes, yet consider yourself a smart pool player, you really ought to give One Pocket a try – it just might give you a whole new lease on your pool career!

Even if One Pocket does not develop into your favorite game just yet, playing One Pocket is practically guaranteed to improve some skills that carry over into other pool games – skills such as banking, safety play, speed finesse and cue ball control.

This web site is not going to make you a strong One Pocket player all by itself – you’re going to have to get into the trenches with other One Pocket players yourself to get a real feel for the game. But can learn the basics and find lots of tips for improving your One Pocket game here, and hopefully have fun while you are at it!

A One Pocket Primer

After all, a game in which each player only shoots at a single pocket must be real simple, right? Actually, the basic idea of One Pocket is simple, yet despite that – or perhaps because of that – the strategy and shot-making can become wonderfully complex. However, before you start running, you need to learn to walk. Here are some of the basics to get you started:

Because there is no certain way to make a ball on the break in your own pocket, the conventional One Pocket break is designed to open up the rack on your own chosen side of the table, without leaving anything that goes into your opponent’s pocket. You want to break in a controlled fashion, so that you get the benefit of loose balls near your own pocket, without leaving loose balls near your opponent’s pocket. Once you learn how to break in One Pocket, it becomes a big advantage, and that is why an alternate break format is used in One Pocket – rather than winner breaks.

Score When it’s Safe To

One Pocket is a single rack game – it can take only a few shots to win, yet one mistake and your opponent might run out too! So be careful how you select your shots and be careful how you play them, but keep in mind ultimately you have to shoot aggressively enough to win, if you want to win. Generally, you can shoot aggressively either if the shot is free of danger, or if the shot is easy. Otherwise, you might want to play less certain shots as two-way shots, where you are shooting towards your pocket, yet playing safe at the same time. On tougher shots it often helps to shoot with just enough speed to reach your pocket, because unlike other pool games, in One Pocket a near miss can still pay off if you leave the ball close enough to your pocket to create a problem for your opponent. Remember, if they make a ball in your pocket it counts for you, unless they pocket scratch or jump the cue ball off the table! 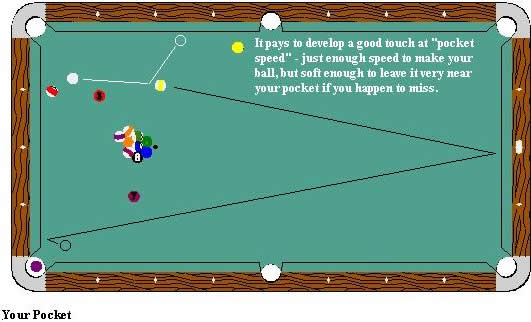 Prevent Your Opponent From Scoring

While it might be tougher to run balls in One Pocket than in other games, fortunately it is also easier to play safe – it’s that only one pocket thing! As your game develops, you will discover many different ways to play safe in One Pocket, and eventually you will need them all. Sometimes all you can hope for in a safety is to survive for another inning just by keeping your opponent from running out, and you might even have to sacrifice something just to do that. 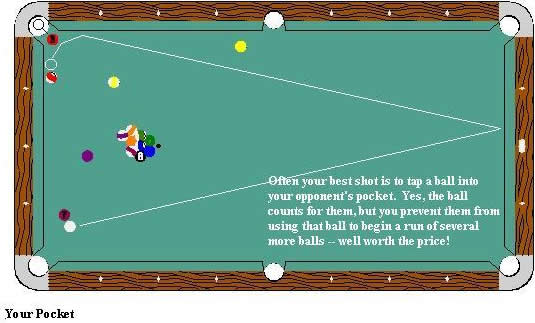 At other times, you might play a safety that puts your opponent in danger of a total sell out. That kind of safety would be considered a ‘trap’, and some traps can turn the playing of a safety into an aggressive act indeed. 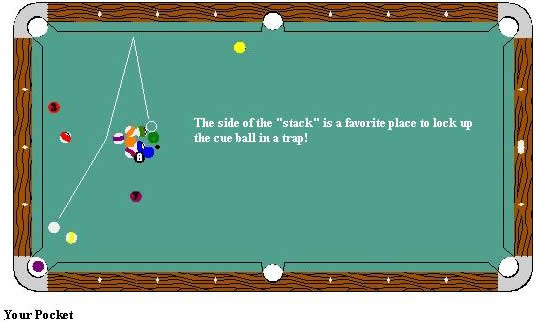 Of course, even if you play a great trapping safety, your opponent might just pull off a great ‘escape’, or even turn the tables on you!

In One Pocket, you cannot just play defense and wait for your chance to run out, you are going to have to be more proactive than that. You can greatly improve your chances of winning if you can reposition balls that favor your opponent, and leave them so they favor you. Generally that means on your side of the table, and the nearer your pocket the better! That may sound easy, but of course at the same time your opponent is fighting to do the exact opposite every step of the way. That’s what the challenge of One Pocket is all about. 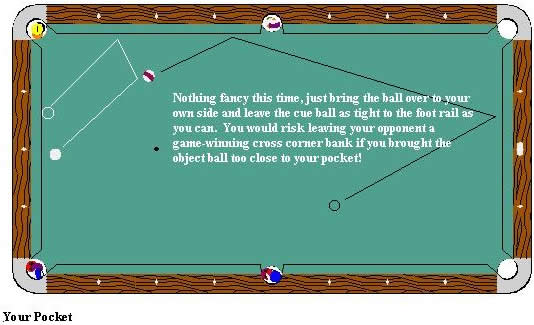 Smart players do this for two very big reasons. For one thing, it allows them to build on their favorable position, so when they finally do get a shot, they can run more balls. And of course the other big thing is, if they can really lock up the cue ball at the same time they leave balls near their pocket, they might trap their opponent into giving up an immediate shot! The most basic tactic for making it difficult for your opponent to move balls that favor you is to leave the cue ball behind either the ‘stack’, or behind other blocking balls, so they cannot easily get to them to remove them. 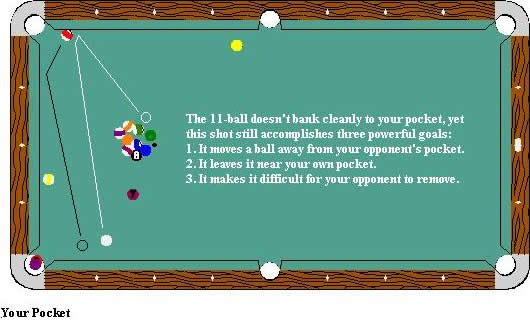 Learn to Play the Score

The basic idea of ‘playing the score’ is to adjust your strategy depending on the score, to give yourself the best chance to win. Typically, this is done by playing more conservatively and sending balls out of play to protect a lead, or by playing more aggressively and keeping the balls in play when you you are way behind. Playing the score is all about managing the odds of winning. If you need just one or two balls and your opponent needs significantly more, generally your odds improve the less balls are in play, and their odds improve the more balls are in play – because of the possibility of stringing together a run with multiple balls in play! 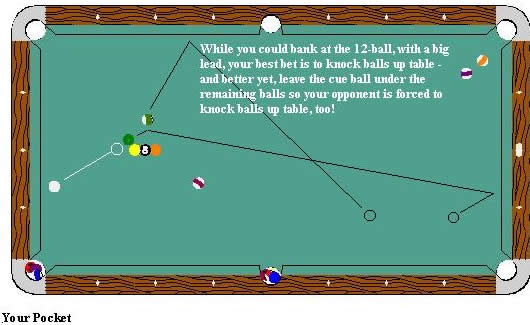 There are several books that cover at least something about One Pocket, although some may be out of print. Visit our Marketplace to purchase these:

To see many One Pocket shots taught in action, you can check out some of the instructional videos:

You can learn a lot by watching

Try to watch good One Pocket players and really focus on the ebb and flow of strategy. Whether you have any strong players near you or not, try to arrange a trip to one of the bigger One Pocket tournaments like the Derby City Classic , or one of Grady Mathews’ Legends of One Pocket tournaments. These are great places to get completely saturated in One Pocket!

Even if you cannot get to a tournament in person, you can see literally hundreds of hours of championship caliber One Pocket without ever leaving home by purchasing Accu-Stats videos of One Pocket tournament matches. Not only will you learn a great deal from watching these tapes, you will learn by listening to the expert commentary too.

Five excellent One Pocket matches from Accu-Stats to get you started:

Find a One Pocket mentor

The traditional way to learn One Pocket, is to spend time with an experienced player. If you have access to an experienced One Pocket player that is willing to give you basic lessons, or otherwise share their knowledge, you should definitely take advantage. Even if they won’t give you lessons as such, you might find an older but knowledgeable player, whose shooting skills may have declined, but who still knows the game and is willing to play you.

If you are fortunate to have a knowledgeable older player available to learn from, the main thing is to please pay them respect – they undoubtedly deserve it, and what a cheap price for you to pay as a student — and often it is all that they ask!

Get professional One Pocket instruction

There are some professional instructors or player/instructors that offer One Pocket expertise, and if you have a chance to work with one of them, that should give your game a huge boost.