A modern master of traditional full rack Banks, Tony ‘Fargo’ Ferguson topped our 2008 Bank Pool vote. Tony grew up in the heart of Banks country but it was a road trip to Southern California that was his main introduction to serious after-hours play. There he found himself victim of none other than the youngster, Keith McCready, who wound up beating him at his own game. That humbling experience sent Tony back to Kentucky, where he redoubled his practice efforts, especially in the strategy and defensive side of the game. 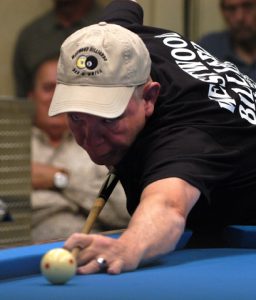 Tony is an ironworker by trade, and between the toughness that work builds, and the country toughness that seems to breed in those Kentucky hills, Tony was not one to shy away from a challenge. And there was plenty of strong Banks competition right in his home area. Cornbread Red grew up just fifteen miles away; Buddy Hall only about an hour away, and when he wanted to travel a little, there were notable matches with guys like Bugs Rucker and Truman Hogue available. It didn’t take Tony long to establish a reputation as a skilled and determined match play competitor in the art of Banks.

With the ironworker’s steady hand, and his natural coordination, Tony has also developed into an excellent one-handed player over the years. He has a natural mathematical mind, and is one of the very few top bankers who says he uses a “system” for calculating banks.

Tony gave the pro tour a shot back in 1989, and even though he cashed in every event he entered, he realized the effort just wasn’t worth the cost, so he went back to seeking out head-to-head action. However, he makes an annual exception for the Derby City Classic, where he is a perennial top ten finisher in the short rack Banks division, despite his preference for the classic full rack version of the game.