John was born in Salinas, CA July 8, 1939, the youngest of three boys. His father died in a car crash when John was 4 after which his mother moved the family to the LA area to be with her mother and grandmother. His mother was a piano player and singer, and as a working single mother, John was raised in large part by his grandmother and great grandmother after his father died.

John discovered pool as a teenager, around the age of 13, when he started going into nearby Steve’s Poolroom, which had a few 5×10 snooker tables and 8’ pool tables. Less than strict supervision was starting to get John in trouble with some of the kids he was hanging out with at that age, so John’s older brother advised his mom to give John permission to hang out in Steve’s poolroom. Which she did, and John immediately began to spend all his free time at Steve’s. 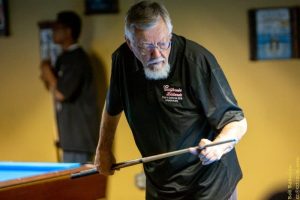 Steve taught John the basics of how to bridge and stance, and since Steve was an Englishman with a Snooker background, that was the style John learned, and has stayed with his whole life.

John got pretty good quickly, and soon was winning the lion’s share of the small stakes against his local peers. At that time, there were many poolrooms and snooker tables around the LA area, so John started to branch out as his game improved, to the point that John was making a living playing pool. His outgoing personality and ability to adapt to all kinds of games, from Snooker, to 9-ball, to even a little billiards brought him a good mix of local action. As he improved, he began to have to give up weight or play one-handed to keep players at the table.

That worked for John even as he got married and his wife got pregnant. But as his financial needs grew and he tried to squeeze more $$, he found himself killing his own action. One night John matched up with Richie Florence, and John got out to a promising 18 game lead, which would have been a nice score for him, but Richie had no quit in him, and eventually Richie came all the way back and busted John. That was a wakeup call for John and he promptly went out and got a job. 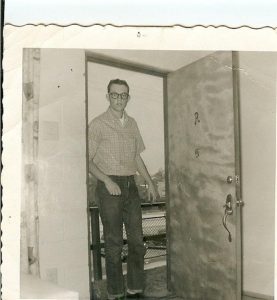 But John never quit pool and never quit gambling, in fact he found certain jobs, like being a road rep for a saw company, that allowed him to travel around to different rooms for fresh action – without quite as much pressure on him to win or go hungry. In 1973 John opened his own insurance agency a few miles from the Golden Cue in Rosemead, CA. When someone came in looking for action, they called John.

The next 40 years for John had that mix of pool action, a day job that covered the bills (and sometimes conveniently accommodated his pool action), and raising a family of three boys himself. People loved to play John, because he was good action, and a good guy to compete with. He did well with all the local players right up to the shortstop level, which allowed him to pump up his bankroll for the many times a top player came around looking for John. He got to gamble with about every top player that came through the west coast that way. The late Billy Ray Suden showed John he was in the player’s road book, “Play the big guy with glasses. He plays everything and will gamble.”

Against the very top players, John may have needed a little weight when those guys were in their prime, but as those top players got older, and their games naturally declined, John’s speed never really fell off, right up through his 70’s, which is remarkable. Despite wearing glasses since he was a teenager, John partly credits his eyesight, which has remained strong without any change to his prescription for years. 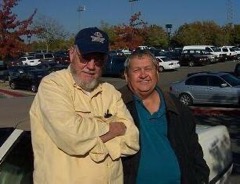 He also thinks his specialization in One Pocket has been very good for his unusual pool talent longevity. And maybe even his snooker mechanics, as John’s ball pocketing skills have stayed strong, even as his knowledge of the game has grown over all those years. In the long run, John’s strong and steady game overtook most of the other great players of his generation, leaving him at the top of players anywhere near his age bracket. Even in the last 10 years John has remained very competitive in One Pocket — even
against top young players who are in their prime. In 2011, at the age of 72, John notched a 3-1 win against Shane van Boening in the US Open One Pocket, on the way a 7-8th finish that year. Just a few years later he won the first Bogie’s Senior One Pocket tournament at the age of 76.