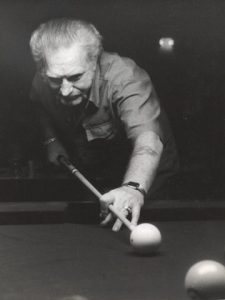 Billy ‘Cornbread Red’ Burge grew up in the small town of Fulton, which straddles the border between Kentucky and Tennessee in the rural South. Later, for many years he made his home base The Rack, just outside Detroit, Michigan. Formally known as the Capital Billiards Club, The Rack became a mecca for pool’s road players seeking high-stakes action, with Red in the middle of it all.

A fiery, intense and seemingly fearless player, the country smarts and hard-nosed instincts for survival Red developed in the rural south never left him, even as he followed the money north to havens of action like Johnston City and Detroit. These qualities helped make him one of the most talented and entertaining characters in the history of pool. 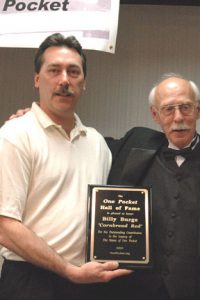 * As a tournament player, Cornbread twice came within a single ball of winning a major One Pocket event, both times claiming second place behind BCA Hall of Fame inductee Ed Champagne Kelly:

* In action, Red was in a class of his own. Bob Henning quotes Red’s philosophy this way, “I don’t live by the month, by the week, or even by the day — I live by the game.”

* As a Banks Player, Red’s combination of skill, competitive instincts and fiesty personality made him the favorite against nearly every player on earth — especially on 5×10 tables.

* Cornbread collaborated with author Bob Henning to create the book, Cornbread Red: Pool’s Greatest Money Player, which chronicles many of the highlights of Red’s colorful and action-packed life in pool..