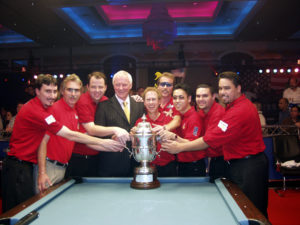 Born April 30, 1971, Jeremy grew up in the Baytown suburb of Houston, TX. He didn’t start playing pool until he was about 17, but he was good at other sports too at that time. He had a friend in Baytown that he worked with at a pizza place that talked him into playing – “He kind of hustled me.” He had always been around gambling – his family gambled, so that was something he was comfortable with. He quit his job at the pizza place and got one in one of the game rooms in Baytown so he could play more pool. “The players that play the best are the players that make a true athletic motion with their back arm,” and Jeremy had that gift.

Around 1989-90 Jeremy started to come into some of the bigger Houston action rooms, like Slick Willie’s, Cue and Cushion and Le Cue. There might have been close to a hundred poolrooms in Houston at that time. At first Jeremy stayed away from the 9’ tables “because they were a little intimidating”, and One Pocket was too for that matter. But One Pocket was prevalent, and he was often drawn into it by a player he defeated at 9-Ball. 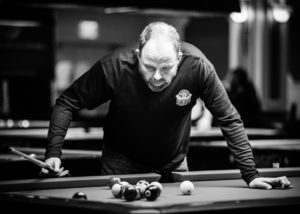 There was a lot of talent and action in Houston at that time, with strong players like Duke Dowell, Rodney Stephens, Buddy Hall, Gabby, and of course, Jersey Red.

Jeremy had first met Red at an exhibition in Baytown. But room owner Alan Alenise (sp?) of Playoff Billiards in Houston sat the two of them down and encouraged Red and Jeremy to team up. “Red was such a good guy to be around. He taught me about the pace of the game – the real game part of One Pocket – aggressive vs defensive, how and when to shoot. It’s the only pool game you can really game plan for.”

Jimmy Spears was also a big influence at that time, and Jeremy developed a real strong 9-ball game too, which led to him winning the US Open 9-Ball in 2003, and competing on multiple Mosconi Cup teams. 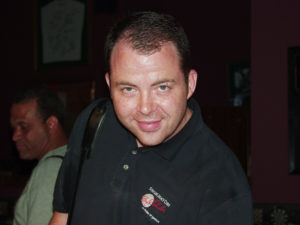 He also began to venture out on the road, where he played a lot of One Pocket. When he found he could hold his own against strong players like Cliff Joyner and others he began to really believe he could play at a top level. He and Gabe Owen teamed up for about 15 years, and Gabe credits Jeremy for lifting his own game during that time. “If you’re going to be around Jeremy you are going to learn something no matter what level pool you’re at. It took a while for me to start booking winners but I learned a lot from him – he was a big help to my game.”

Recently Jeremy has been doing more and more One Pocket commentary, and he has become an immediate fan favorite for his demeanor and knowledge of the game. He believes One Pocket can be played a higher level of thinking than other games, and that comes across in his commentary. Like Jersey Red, Jeremy has distilled aspects of the game into some astute one-liners, like these gems: 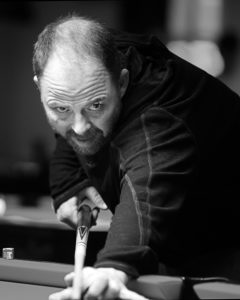 “Every shot matters,” meaning even early shots can make a big difference later on – depending on where you place balls.

”Moving is plural,” and if you are moving well eventually you will get more free shots.

Among his many One Pocket tournament wins, Jeremy won the 1998 US Open One Pocket – but in a highly unusual fashion, he got his opponent Jeff Carter on three fouls in the hill-hill game!