Scott Frost was born July 17, 1975, in Des Moines, Iowa, where he lived until he was about 25. He didn’t start out as a pool player, he was first team all-state basketball in high school, but he missed one practice as a 16 year old junior (visiting his brother who was sick) and his hard line coach would not even let him ride to the next game in the team bus. So instead Scott snuck into a poolroom with a buddy of his that very day. It turned out that poolroom was owned by Don McCaughey, and that first time Scott played, his gambling nature found him losing the entire $22 he had to a local player, Tom Melon. Scott is not left handed but he started playing pool left handed that first day and by the second day it already felt awkward to switch, so he just stayed with it. 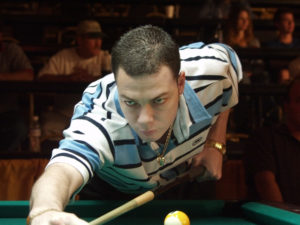 Scott still has a little nagging regret that he did not continue with basketball, but basically starting that fateful day, he just took al that energy and will to win and turned it toward pool. He started beating Tom about 6 months later, so Tom wanted to play One Pocket instead, since Tom had the advantage at that. Thus began Scott’s focus on the game of One Pocket.
As Scott tells it, there were some tough dudes in that Des Moines poolroom — including mob characters that had migrated down from the Chicago area. They staked him and also introduced him to cards and other gambling. Being under 21, Scott was not even supposed to be in there, but Don kind of took him in. As Don recalls, “His mom would drag him by the ear and pull him out — quite a few times! She told me to bar him out of there. I told her, I can’t keep him out; he’s going to sneak in anyway. He loves to play pool! She said, ‘Well promise me you won’t let him drink.’ I said okay I can promise you that,” 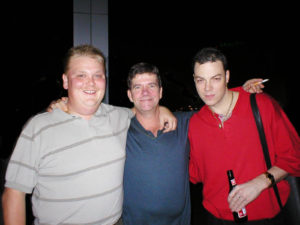 Scott talked his mom into getting an 8′ table for home, He had one video of Efren playing One Pocket which he about wore out. Mostly Scott worked on playing himself. He could stay focused a hundred or more shots into a game against himself and never forget who’s shot it was. That is where he started coming up with those first aggressive power One Pocket” shots that led to his signature style.
He first started venturing out nearby, including Olathe KA, which was hosting One Pocket tournaments. He made trips to Vegas too, “Gabe Owen and Corey Deuel were also out there playing league players. We all had our corny lines.” They would make a ton of money – like 30,000 a trip! He had so much cash at the time, and still living at home, “My mom thought I was a drug dealer!” Scott met Ronnie Allen when Scott played Toby Flaherty getting 10-8 and he lost the first few games at 500/game. Then Scott caught a gear and starting winning, and at one point Scott overheard Ronnie whisper something about “look at what this kid is doing!”

Once he realized that One Pocket was considered a game for older people – Scott realized he had an angle where he could make money and so he played it up. “I always used my first name Scott – it didn’t matter – I put on a show. I wore gold, and always wore some kind of college shirt. I acted like a cocky kid. I made them think I was a rich kid.” People would give him huge spots. He always started with 9-ball and then let them hustle him to play One Pocket. “I did it to Jack Cooney! That is how we met when I was about 22, in Olathe KS. I came to this tournament and Jack was there, not playing in the tournament. I lost on purpose to a local player and threw a tantrum where Jack could see it. Barbara ended up punching Jack, because Jack would not quit. She stepped on and broke his glasses to make him quit!” Later Jack and Barbara took Scott went on the road, with Scott as “their son”. At one point, Scott had won about $15,000 playing a guy, before the guy quit and wanted to play “your dad”.
Scott has many One Pocket tournament wins, including several majors: 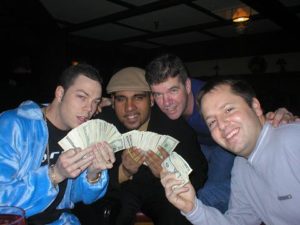 In 2010 Scott introduced his “Power One Pocket” DVD’s.

Scott also helped popularize the high stakes live stream challenge matches that have been a major force in building One Pocket interest in recent years, including matches with great players like Efren Reyes and Alex Pagulayan.