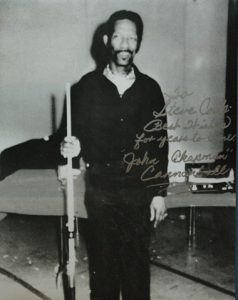 A great banker, John ‘Cannonball’ Chapman possessed with one of the most powerful strokes in the history of the game. He reportedly got his nickname from Fats, because of his preference for firing his long banks in with such explosive power. Ray Booth, a fellow road player, was so impressed that he is said to have asked that ‘when it is time for me to go, just lay me on a pool table with my head on the foot spot and let Cannonball fire that cue ball at me’.

Originally from Houston, Texas, Cannonball honed his game among the legendary Bank Pool masters of Chicago, including many epic battles with fellow inductee Javanley Youngblood Washington. It is fitting that the two great Chicago players should join the Bank Pool Hall of Fame on the same ballot.