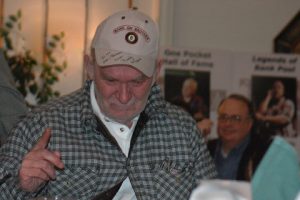 Vernon acknowledges the crowd at his induction dinner

Vernon Elliott, like fellow Legend of Bank Pool, the late ‘Cornbread Red‘, is a tough country bred Kentucky road player from the old school. Except unlike Red, Vernon completely shunned the publicity of tournaments, never once playing in one. Like Red, Vernon’s fearless hustling style took him all over the country, into even the toughest of poolrooms in the toughest of neighborhoods. Often called the “greatest under-cover player of all time,” Vernon’s approach even caught players that thought they knew him off-guard now and then. 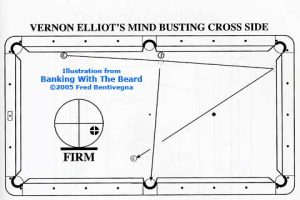 As a young man he developed as a player among the great bankers of the day in the banking capital of the universe, Louisville, KY. Among Louisville’s banking legends were guys like Bob Bowles and Charlie Jones, where even Eddie Taylor was humbled now and then. A patient and observant player who could also win at 9-Ball and One Pocket, Vernon hunted the big game players, seeking out the ‘big score’, which he was very successful at. Reliable sources report that on several occasions he matched up in single set races for six figure amounts.

Finally forced into retirement by the effects of several strokes, Vernon himself says he would still be out hustling if he “could still stand up and shoot.”