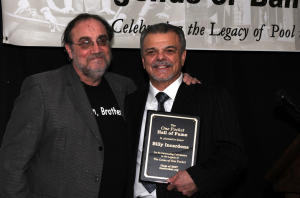 Pittsburgh Billy Incardona has been a solid One Pocket player and after hours legend for many years now. In fact, he’s still mixing it up against a whole new generation of players today. Of course, as the ‘voice of Accustats’, he has helped educate thousands of players in our favorite game. Recently Billy has also been promoting One Pocket tournaments in his own action-friendly poolroom.
Like many of our great players, Billy was gifted with natural talent and a fiercely competitive nature, and growing up in Pittsburgh there was no shortage of competition. At that time, Pittsburgh was home to the Hawk’s Nest, owned by 9-Ball champion Bernie Schwartz, which was also the home poolroom of another young champion, Jimmy Marino. In this company both Billy’s game and his game-making flourished. In fact, one thing that stands out with Billy, besides his knack for in-game strategy, is his knack for managing the game before the game, the art of matching up. 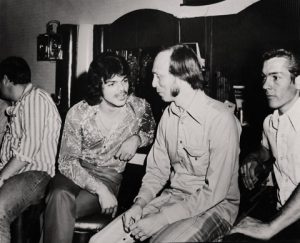 Bill won the 9-Ball division at Johnston City in the Jansco Brother’s 1972 summer tournament. At this stage in his career he was ‘9-Ball Billy’, but like many players, as he got a little older he began to turn his attention to One Pocket. His One Pocket game really got a boost when he lived in Las Vegas where he had regular private sessions with Hall of Fame player Ed Kelly. In the relaxed atmosphere around Billy’s personal table, Kelly revealed both the shots and the style that made him one of the best ever, and Billy’s observant mind absorbed it all.
While he never snapped off a major One Pocket tournament, Billy has finished strong in several Pocket Apiece events, despite being more of an action guy than a tournament player. As fans of the game, we are very fortunate that Billy not only has a great mind for game nuances and a wealth of first hand experience, but he also has the ability to communicate, which makes him a much appreciated commentator and teacher. 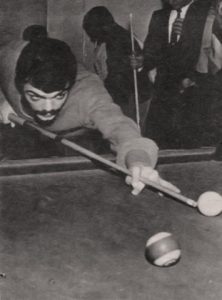 Another shot of Billy, from an old copy of
The National Billiard News
Photo courtesy Conrad Burkman

Billy’s top finish in a major One Pocket event was:

As the ‘Voice of Accustats’ you cannot miss Billy’s impact on the game, if you have watched any of the hundreds of matches in Pat Fleming’s inventory.
Billy is featured in his own One Pocket instructional video, Common Sense One Pocket, which can be found along with the rest of their inventory by browsing their website: Accu-Stats.