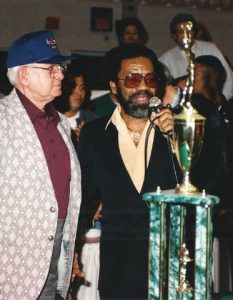 A lifelong resident of Washington, DC, ‘Strawberry’ was born Dec 10th, 1933, so he just turned 73 earlier this month.

He was a family man and a US Army veteran and then worked for the Post Office for a time before he turned to pool full-time to support his family. He had nine sons and two daughters, so as he put it, he “couldn’t afford to miss!” He learned from observation, and would practice new shots or moves until he perfected them. At one point early on in his career he spent a little time on the road with Rotation Slim.

Strawberry’s best years as a player were the ten years between about 1963 to 1973; during that stretch Strawberry recalls he “never lost a match.” Like ‘Chicago Bugs’, Strawberry would not play in pool tournaments; he would wait to play after the tournament was over. 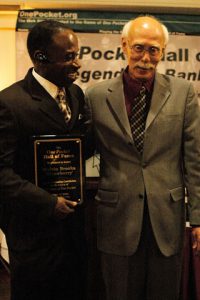 With help from Grady Mathews and Dennis Wilson, Strawberry promoted two major One Pocket tournaments in 1991 and 1992 in New Carlton, MD. Both Eddie Taylor and Cicero Murphy made appearances there as special guests.

Strawberry was one of three One Pocket players elected into this year’s class of inductees into the One Pocket Hall of Fame. He had received this news several weeks before his death, and was very excited about the honor, and looking forward to coming to Louisville for the induction dinner.

The following poem was dedicated to Strawberry at one of his International One Pocket Tournaments in the early 90’s. It was written by the late Paul Jones of Chicago.

Showdown at the Sheraton – One Pocket Masters

Some of the greatest players on this planet earth
Are gonna play some One Pocket, so get your money’s worth.

Legends of the past, and younger players too
Will lock horns at the Sheraton to see what they can do.

Strawberry and friends, they don’t mess around
When they put on a show they really go to town.

One Pocket is a game of classic pool
It is based on science, where safety is the rule.

Not like most games, where you shoot out in a breeze
You can run eight and out, but you had better learn to squeeze.

One Pocket is a game where you have to plan and probe
Sometimes for you to win you need the patience of Job.

If you’re gonna play this game, for you to reach your prime
You will have to learn to play it cool, and shoot no shot before its time.

Yes, remember all the ole One Pocket masters, the safeties, moves and locks
Whichever player gets this cheese will be a proud ole fox.

As time progresses on and stories fill the air
I’ll many times reflect and be glad that I was there.