Hard Times in Sacramento, CA has a real nice tournament setup in a separate room with eight extra tight tables and bleacher seating

Hard Times kicked off its annual Summer Jamboree with a series of mini tournaments Monday night. True to its reputation as a hotbed for One Pocket, 4 out of the 5 minis were One Pocket, using a special race to 15 ball count format developed by tournament director Tom Suarez. If a second rack is necessary to determine a winner, then the player with the lowest ball count breaks. 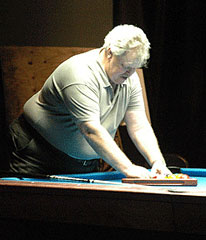 According to Tom, “All the players really liked the new format. It is based on an idea I got from a conversation with Ronnie Allen last year.”

Mark Haddad won two of these minis, with Jose Parica and Tony Chohan each snapping off one as well. In addition, Parica ran 15 and out twice!

Buddy defeated Jose 5-1 in the extended race to five finals. This year’s event had 49 entries in the One Pocket division.