OnePocket.org is pleased to present the exclusive serialized publication of One-Pocket Man, a new novel by OnePocket.org member Al Betz. One-Pocket Man is a fast-paced crime novel, not a pool instructional book! It features a mid-life hit man for the Chicago mob who is offered the chance to trade a new life for spilling what he knows to the FBI. He happens to be a pool player and a One Pocket fan, but old habits die hard….

Danny Bonto is a mid-level enforcer in the Chicago mob who has outlived his usefulness. He learns this when the Feds let him listen to an undercover tape of his boss arranging to have him killed. In exchange for his providing them with much damaging information, the Feds move him to Philadelphia and set him up in a poolroom where he quickly runs afoul of the Philadelphia mob. He hires a teen-ager to work in the poolroom whom he takes under his wing and teaches one-pocket, the crème de la crème of pocket billiard games.

Albert J. Betz is a native Philadelphian and a veteran of the United States Army Intelligence Corps, deployed primarily in Japan. He also lived in Chicago for six years before returning to his Philadelphia roots where he is an avid poker and one-pocket player.

4. Checking Out the Competition

5. Evan Comes on Board

Mayfair Realty had a large open entry room with four desks and the appropriate number of chairs. Telephones and multiple listing books were in abundance. There was no receptionist, but a fat middle-aged man wearing a toupee you could spot across Soldier Field rose from behind his desk and asked if he could be of help.
“I’m looking for a commercial building with about fifteen hundred square feet of open floor space, preferably all on one floor. I want to open a poolroom” Danny said.
“Do you have any preference on a location?” Toupee asked. He stretched out his hand. “I’m Jim Collins.”
“Danny B– Barbone” Danny said, shaking hands. “Along Frankford Avenue in Mayfair would be great. If not, let’s see what you have.” Mayfair Realty had looked to be strictly residential at first glance, but Danny had picked up their name and address from a sign in front of a former bowling alley, so they had as good a chance as any of having what he wanted. Besides, he felt it wise to patronize local businesses. For all he knew, this guy could be a future customer.
“Let’s see what we have” Collins said.
For the next day and a half, Collins took Danny all over Mayfair, Holmsburg and even into Tacony. The closest place he could find that looked like it might do was a former floor covering store right on Frankford Avenue just north of Cottman Avenue. The main floor was a little small, but it had a full basement with an eighteen by twenty-four foot room in the rear that had been used for storing floor tile. At one time boxes of tile were fed into the basement by way of a slide that could be extended up through ground level trap doors outside in the back. The slide was gone, but the doors were still there and functional. If business demanded, he could expand into the basement with at least six more tables. The installers could lower them into the basement through the trap doors. It even had a rest room on the first floor, a sink with hot and cold-water taps and a toilet in the basement. With a little money, he could install additional rooms on the main floor and turn the basement room into a studio apartment with a shower stall and a mini-kitchen.
“What if I put in some improvements like a shower and a stove? I’d pay for them myself” Danny said.
“Considering that the place has been vacant for over six months, the owner would probably not have a problem with that if you signed a three year lease” Collins replied.
“Why don’t you see what he says?” Danny asked.
By the end of the day, Danny had signed the lease and went looking for pool tables.
Collins had a number of contacts to handle the changes Danny had in mind for the apartment, and the lease agreement stipulated that the place be broom clean. The landlord arranged to put a dumpster in the alley behind the building to collect all of the trash from the previous tenant. Danny made a trip to his storage locker and retrieved some of his tools. While the carpenter and plumber were working downstairs, Danny built a counter, or “desk” as he called it, at the front of the poolroom in the corner opposite the door. It was six feet long in the shape of an “L” with an opening near the wall to walk through. It was four feet high and had a two by four frame with quarter inch paneling on the sides closest to the players. On the inside were shelves for pool balls, pool chalk and other pool paraphernalia. Behind the desk were racks for potato chips, pretzels and other snacks as well as a lockable glass display case for cue sticks for sale. The desk had a Formica on plywood top that he had bought ready-made from the local home supply house. Besides the extra pool balls, Danny also kept his nine millimeter pistol within easy reach. He bought a stuffed barstool with a sturdy back to keep behind the desk.
The landlord arranged to have the old floor covering company’s sign taken down, but Danny hired the carpenter and plumber. They installed a second rest room for ladies on the first floor. Danny had them add a utility room between the rest rooms with a large sink and storage shelves for toilet paper, trash bags and extra snacks and enough room to stack cases of soft drinks. The plumber and carpenter were downstairs installing a small bathroom, kitchen counters and cabinets in what was to become Danny’s new home. Danny called a number of sign companies in the area for design ideas and prices for his new poolroom that he decided to name Banker’s Hours.
Danny also talked to an accountant in the Federal Building that Corvino had put him onto to see how much money they would give him to buy as many pool tables as he could conveniently install on the first floor. He had a sneaking suspicion that he could lease the pool tables, but if the Feds would buy them for him, what the hell, let them. In the meantime, he would call Brunswick, Victor, Gandy and any other pool table manufacturers he could find to see how they do business. 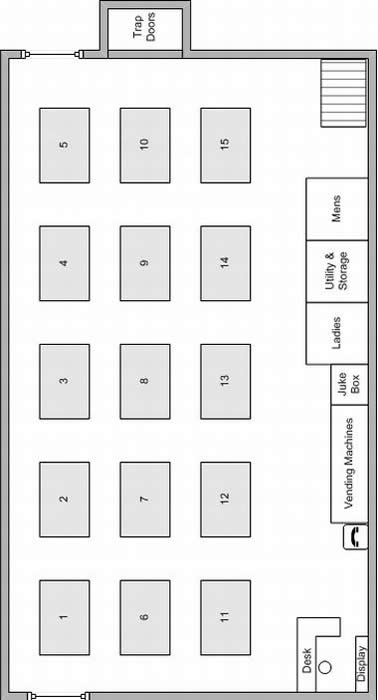