Gentleman One Pocket legend Bill ‘Weenie Beenie’ Staton grew up in the Washington, DC area. Although he came to pool at the relatively late age of 23, Bill was one of the early stalwarts of Johnston City. In fact, he was one of a handful of players that used to gather at George Jansco’s in the years before the original 1961 tournament that instigated George to hold the very first Johnston City tournament, which was just One Pocket that first year. In contrast to the playful sounding name, Weenie Beenie is one of the most dignified and well-respected personalities to ever excel at One Pocket. 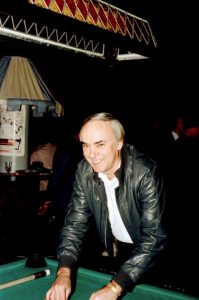 Bill earned his unusual nickname because he owned bean and hotdog stands in the Washington area bearing the same name, with the same unusual “double e” spelling. Over the years, the hotdog stands helped fund Beenie’s pool interest, and as Beenie tells it, occasionally his pool playing helped fund the hotdog stands.
* As a tournament player, Weenie Beenie has played in perhaps as many One Pocket events as anyone, from that very first Johnston City tournament right up to several of Grady Mathews’ recent Legends events. Frequently placing ‘in the money’, Bill won one event:

* Well known for his after hours play, Beenie has for many years had a reputation for his notable courage to step to the table even against the strongest players, for serious stakes.

* As a room owner and tournament promoter, he ran the Jack & Jill Cue Club in Arlington, VA — one of the top action and tournament rooms of the 60’s and 70’s, and so popular it was open 24 hours a day, seven days a week for fourteen years without ever closing its doors, until the building itself was torn down. He promoted many tournaments, including Straight Pool, 9-Ball and of course his favorite, One Pocket.

* His smooth playing skills and engaging personality for many years made Beenie a favorite for appearances in exhibitions and on such popular television shows as The Steve Allen Show and The Johnny Carson Show.

Two of the tournaments Bill promoted and hosted at the Jack & Jill Cue Club that included One Pocket — pretty good prize money for the early 70’s!

Both ads from the National Billiard News