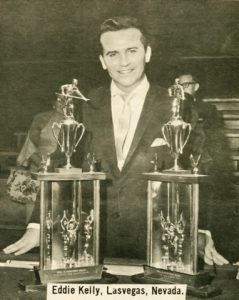 ‘Champagne Eddie’ Kelly was born May 17th, 1938 in Waterbury, Connecticut, and it was in Waterbury that he first began to wander into the local poolroom. He found a natural calling for the game, which led him to start a little hustling by the time he was fourteen. After a stint in the Marine Corps, Eddie began to take his game on the road. Around that time he was one of the ‘undiscovered’ players that Titanic Thompson steered around, but it was later road trips with Ronnie Allen that really brought his One Pocket game to a peak.

He captured his first One Pocket title in Johnston City in 1966. In ‘71 Eddie won the One Pocket division in Freddy Whalen’s Los Angeles World’s Tournament, which was one of the richest tournaments in pool at that time. A very strong all-around player, he captured numerous 9-Ball and Straight Pool titles as well, and was inducted into the BCA Hall of Fame in 2003.
In ’93 he came out of retirement to win the Legends of One Pocket tournament in Las Vegas over a huge field of 111 players, which was the largest One Pocket event ever until the Derby City Classic came along.