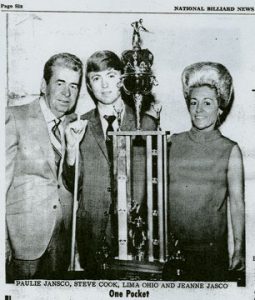 1970 Stardust One Pocket and All-Around Winner

One Pocket legend Steve Cook died in his sleep at his home in Lima, Ohio at the age of 56. Under the tutelage of Junior ‘Lefty’ Goff he took to One Pocket as a young man, surprising the field with his 1970 Stardust victory. His boyish looks belied his fierce competitive talent, earning him the title ‘The Clark Kent of One Pocket,’ since he looked more like a school teacher than a hardened One Pocket player.

Steve is one of only two players to win both a Jansco Brother’s One Pocket championship and one of Grady Mathews’ Legends of One Pocket. Steve’s major One Pocket wins include:

Steve was one of the co-authors of Eddie Robin’s landmark One Pocket book, Shots, Moves & Strategies.

My advice to all one-pocket players, beginners and experts alike, is to work as hard on the easiest shots and moves as you would on the most difficult. This advice is not meant for games like straight pool, for example, where the better players continually pocket balls by the rack. Just playing that game will naturally keep them in stroke. In that game the player must relax wherever he can get away with it. Relaxing on the simple shots in one-pocket, on the other hand, is why so many get out of stroke.

Among the many reasons why I love one-pocket is that, even among professional level players, both sides get to play every game. More importantly, even after years of play you can still continue to learn more and more shots, moves, and strategies. It’s the pool game for strategical and creative abilities. – Steve Cook

Steve won the 1991 Legends of One Pocket, Philadelphia Style

Steve led a normal life as a young boy until he was five years old. He then developed a pain in his right leg, which was caused by a bone deterioration in his right hip. He was not allowed to walk on that leg until it healed, which took patience and determination. After five years, at the age of ten he started walking, but could not play running sports.

Steve was introduced to a pool table when he was fourteen and immediately fell in love with the game. He progressively lost interest in other sports and used all of his spare time playing pool, and started leaving on weekends to play better players. When Steve was nineteen, Danny Jones came to town for an exhibition match with Steve. We asked Danny if Steve could go to the Stardust tournament, which was coming soon, which was approved and Steve finished 23 rd . Steve then moved to Springfield, Ohio and managed a poolroom. 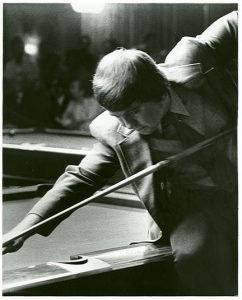 He then moved to Florida where he met Lefty Goff. Steve and Lefty managed Dale Mabry Billiards in Tampa in 1968 until it closed several years later. There were some good players in Florida and with the encouragement of Lefty, Steve’s game improved. Steve then worked at the Varsity Billiard Room in Tampa as the manager and house pro into the 1990’s.

Steve won the Stardust All Around tournament in 1970 at the age of twenty-three, and won many other tournaments along the way. In the words of Allen Hopkins, “Steve Cook was probably the best One-Pocket player in the world from 1976 until the mid- 1980’s.” He won the “Legends of One-Pocket” in Philadelphia in 1991 and the Los Angeles Open in 1992, and won many smaller events along the way.