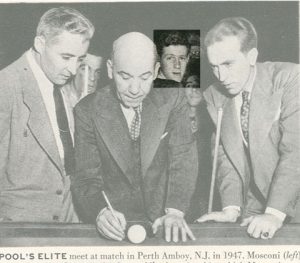 Originally from just New Jersey, Jack Breit came of age as a player during the heyday of the famed poolrooms of New York City. He was a top notch Straight Pool player as well, but One Pocket was the game that really showcased his creative talent, as he brought every trick in his arsenal to the game — plus new tricks that he seemed to come up with daily.
* As a tournament player, Jack finished near the top in several major One Pocket events, finally breaking through to win:

* As an After Hours Player, Jack matched up with virtually all of the top One Pocket players of his time. Traveling to one of Jack’s favorite haunts to take him on at his favorite game was for many years one of the ultimate challenges at One Pocket, and produced many epic battles with such fellow legends as Ronnie Allen.