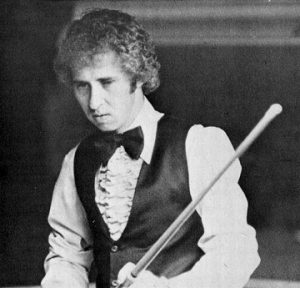 Nick Varner got started playing pool when he was five, when his father bought a little poolroom in Grandview, Illinois. Nick was a two-time college amateur champion in 1969-70 while a student at Purdue University. As a teenager, he became acquainted with legendary One Pocket player Hubert Cokes, who took an interest in Nick’s game and helped him develop his sharp competitive edge. Cokes also brought Nick to the jamborees at Johnston City, where he introduced Nick to many of the great players of the day, while staking Nick to play against a few of them.

* As a tournament player, Nick has won several major One Pocket events, including: 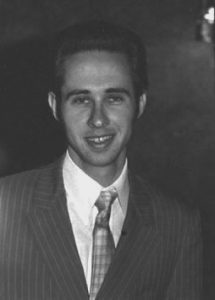 * With his excellent banking skills and dogged patience, for a while Nick had a nearly unbeatable technique of an extreme up table game that commentator Bill Incardona dubbed a ‘wedge game’.  Nick would manage to herd all the balls into a tight cluster ‘wedged’ into one of the upper corners of the table. Taking advantage of this extremely conservative approach, Nick won all four stops of the 2001 Florida One Pocket tour.
* Nick has performed in numerous exhibitions, and runs his own successful business, Nick Varner Cues and Cases.
Nick Varner was inducted into the One Pocket Hall of Fame at a special ceremony held at Fast Eddie’s Sports Bar and Grill during a break from the Carolina’s Open tournament action on September 7th, 2005. Grady Mathews acted as master of ceremonies, and the owners and staff of Fast Eddie’s bent over backwards to make the evening memorable for Nick, as they pitched in with hard work, good humor and great hospitality. 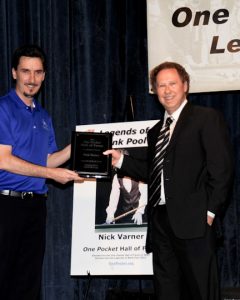 * Legends of Bank Pool
Nick was also elected into the One Pocket Hall of Fame Banks category in 2011, becoming only one of an elite handful of players inducted into both categories. Nick won the Banks title at the very first Derby City Classic:

At right, special guest Johnny Archer presents Nick with his Banks plaque at the January, 2012 One Pocket Hall of Fame dinner.