Cue Sports International brought back a new and improved US Open One Pocket to the Riviera Hotel & Casino in Las Vegas, Nevada for 2011 to a full field and an appreciative crowd of avid One Pocket fans. Originally planned for a field of 48, Mark Griffin of CSI responded to demand for more spots, so the field was increased to 64, with all spots claimed. The field was a good mix of former champions, from legends like Danny Di Liberto to repeat champion Efren Reyes, to young challengers like Sylver Ochoa, with the ranks partly filled by a series of eight qualifier tournaments held in different parts of the country. This was billed as the 12th US Open One Pocket event, and Mark Griffin seems very determined to make this a first class annual affair. This year certainly got the event re-started in successful fashion after a four year hiatus since the 11th event was held. 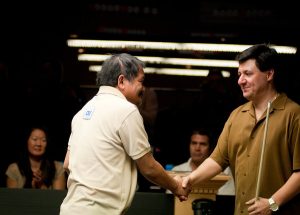 Reyes seemed in comfortable form, unfettered by recent eye sight and back problems, and he moved through the field undefeated. Not that it was easy — he had to reach back and exploit some of that Reyes magic to steal a key match from a very solid playing Corey Deuel. That match came down to hill-hill in the race to 4 winners side, and Corey needed only one ball to clinch with 4 balls on the table — two of which were right next to his own pocket. Yet, somehow Efren survived by impeccable cue ball placement, and eventually Corey flinched to allow Efren to run the last four balls and advance to the winner’s side finals.

The other player that moved through the winner’s side without a loss was Chicago player, Chris Gentile, who demonstrated why Chicago is known for solid One Pocket play. Although Gentile is not exactly a household name in tournament circles, he is well known in action circles – having been one of the finalists for Derby City’s Action award just last January. Chris played very solid for the entire tournament, and impressed many onlookers both with his ability to execute well under pressure, and the speed and confidence of his shot selections in the complex world of One Pocket. And he did not wilt against Reyes; he just couldn’t quite keep up with Efren’s creative firepower. Reyes seemed to be the only player that could solve Gentile, as he defeated Chris both in the winner’s side finals and in the single race to 5 final match, to leave Chris in a well-earned second place. Gentile will be a player to watch in future One Pocket events if he continues along the tournament path.

The award for longest journey through the tournament would definitely go to Alex Pagulayan. After losing his first match against Jeremy Jones, Alex carved his way through nine straight elimination matches in the one-loss side before he finally fell to Gentile in the one-lose finals to end up in third place. On the way Alex knocked out several former One Pocket champions, including Joyner, Deuel and finally Scott Frost, before Gentile put a stop to his marathon run. 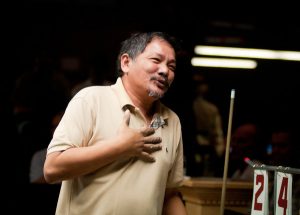 Because the 64 player field featured so many tough players and the draw was unseeded, there were a number of big matches right in the first round of opening day; one being the Jones/Pagulayan match that started Alex on his long left side journey. Other first round heavyweight matches included Sylver Ochoa vs. Cliff Joyner, and Jose Parica vs. Corey Deuel, with Joyner and Deuel prevailing.

In case anyone thought it was a fluke for Earl Strickland to reach the Derby City Classic One Pocket finals this year, Earl started off his eventual 5th-6th finish with four straight wins, before he lost back-to-back to Gentile and Frost. Incidently, Earl made his way through most of this event using the extra long cue that he adopted for his recent 10’ table challenge, until he switched back to a more conventional cue length in his last match with Frost, to no avail.

This event featured live streaming by The Action Report (TAR), utilizing several “high definition” cameras and live scoring all beamed out via a specially rented satellite for the best internet connection available, which made for an excellent viewing experience. The live broadcasts were available daily on the web by TAR via “pay per view”, and free on all of the Riviera Hotel’s guest room TV’s, as well as on giant oversized screens in several locations throughout the BCA/CSI tournament rooms, so it was easy to follow the progress of the tournament.

OnePocket.org sponsored player John Brumback finished in the 17th-24th spot. Sponsoring a player was a first for OnePocket.org. You can read a recap of John’s experience here. 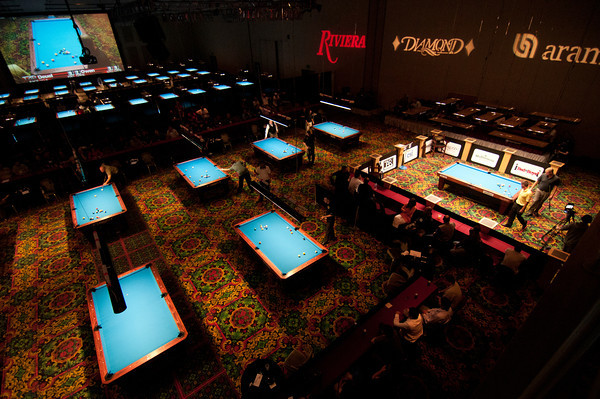 The tournament room, with the TAR TV pit to the right. In the background you get a glimpse of one of the main BCAPL tournament rooms with hundreds of 7′ Diamond tables.