The first ever One Pocket Hall of Fame banquet featured six of the recently elected members of the One Pocket Hall of Fame gathered together to receive their plaques and share their stories. The event filled the room to overflowing as one after another great player entertained the crowd with tales of their own adventures in One Pocket, and acknowledgement of the many other well-deserving players that they traveled with, matched up with or learned from. 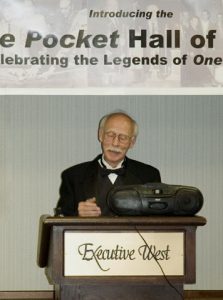 Emotions ran high from the beginning, as Grady began the event with a moment of silence in remembrance of a sadly growing list of recently deceased great friends of the game of One Pocket. Those remembered included fellow One Pocket Hall of Fame inductees Billy ‘Cornbread Red’ Burge, Jack ‘Jersey Red’ Breit, and Larry ‘Boston Shorty’ Johnson, along with other great, great players that are surely destined for Hall of Fame consideration: Larry Lisciotti, Steve Cook, Earl Heisler, banking legend Gary Spaeth, as well as BCA Hall of Fame member Cisero Murphy.

Inaugural One Pocket Hall of Fame inductee Grady Mathews acted as Master of Ceremonies, as legends Ronnie Allen, Efren Reyes, Danny Di Liberto, Leonard ‘Bugs’ Rucker and Bill ‘Weenie Beenie’ Staton were honored for their outstanding contributions to the legacy of the game of One Pocket. The late Billy ‘Cornbread Red’ Burge was represented by his son-in-law Steve Lomako, who accepted Cornbread’s plaque and spoke on his behalf. Knowledgeable fans recognize these individuals not only for their terrific playing talent, but also for the way these players have pushed the envelope of the game itself.

Eighty-six year young inductee Eddie Taylor was unable to attend, and instead arrangements are underway for a local event to honor Eddie in Shreveport, LA, more convenient to his home. Also, inductee Nick Varner, just returning from China, could not make it to the event.

In addition, there were two more posthumous inductees: Jack ‘Jersey Red’ Breit, and Larry ‘Boston Shorty’ Johnson – who we hope to see honored locally as well. These ten players, along with Grady Mathews, round out the 2004 class of inductions into the One Pocket Hall of Fame.

Well-deserved congratulations go out to all of these outstanding players! Yet there are still so many other great players, promoters and teachers that absolutely belong in the One Pocket Hall of Fame; this first group is only the beginning. With your support, fans of the game can look forward to this becoming a very special annual event from here on out.

A special thanks goes out to Greg Sullivan and Diamond Billiards for making it possible for this event to take place at the Derby City Classic.


View all photos from the event