The Hollywood Jack Memorial One Pocket was rescued this year and held in Bellflower, California at Hard Times Billiards over the 4th of July weekend! The One Pocket play was spectacular all weekend as fans filled the room and many more watched online to see who would earn the title. Matches were a race to 3, double elimination; with one race to 4 in the finals.

The field was capped off at 32 players and play began Saturday afternoon on the beautiful Gold Crown 9-foot tables. $1,000 was graciously added by Hard Times owner Eddie Arregiun. And Jay Helfert was the smooth Tournament Director. While most players were from California, a few ventured from out of state to compete.

On Sunday, four players were left on the winner’s side – Sylver Ochoa from Texas against Morro Paez, while “Hawaiian” Jimmy Schaeffer from LA played against Larry “Moto” Evans. Sylver would defeat Morro in a hill-hill thriller to reach the hotseat while Motto defeated fast-paced Hawaiian Jimmy to also reach the hotseat.

On the one-lose side there were eight players who fought hard Saturday to get to continue play on Sunday – Frank “Dabarbr” Almanza, Jose Parica, Jerry Matchin, “One Pocket Rich” Grenier from LA, Jim Galagi from Arizona, Wayne Pullen, Nick Spano and Al Vafa (from Santa Barbara).

The hotseat match showed true One Pocket talent and was a great match for the locals – Motto down 0-1 against young-gun Sylver Ochoa had his hands full also being down 6-2 in ball count in the second game. But Motto pulled through and won that game, made a ball on the break the next game and won, then won the third game to seal the win 3-1 to send Sylver to the one-loss side.

Jimmy Schaeffer & Nick Spano each placed an impressive 5th in this tough event and earned $250. Morro Paez won a close match against Al Vafa (Al placed 4th and won $340 for his efforts). Morro then had another chance at Sylver and again it would go hill-hill but Sylver was determined after his hotseat loss and won the final game against Morro 3-2. Morro had a great event, coming from behind during many of his matches to earn a respectable 3rd place and $440. 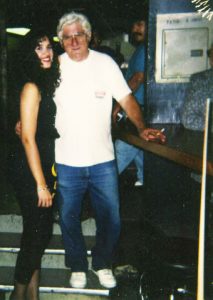 The finals was one race to 4 and again Sylver Ochoa (February 2010 T-Town Classic One Pocket Champ) would meet up with local player Larry “Motto” Evans. This match was all Sylver this rematch, though, as the 24-year old would not let Motto earn a single game and Sylver won the final match of the tournament 4-0. Sylver won $800 for his hard work and First Place finish. Motto played great all day, even after getting off of work at 8am that Sunday morning. Motto earned $540 for his second place finish.

Lenny from www.ontherailtv.com was there to stream the event all weekend. Check out the recorded matches on the website. Thank you Lenny!

And finally, kudos to Eddie Arreguin, Hard Times Billiards owner. He saved an event that was ready to be canceled, on short notice, and made everyone feel welcome! Thank you to all for keeping the memory of the late Hollywood Jack alive.

Results and article by Melinda